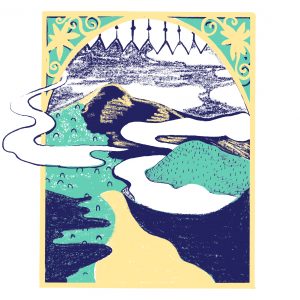 Malvern Link station is full of small details: the freshly painted cream and pink wooden roof of the bridge over the track, the smooth shapes of the well-tended greenery stretching alongside the platform, and the daffodils curving in the design of the wrought iron gate. This area is loved by many people for the surrounding landscape, but there is loveliness in the small things just under your nose here at Malvern Link station.

Behind us, the Malvern Hills loom majestically over the landscape. Lascelles Abercrombie, a Dymock poet, wrote these lines about their beauty:

‘I had a song, too, on my road,
But mine was in my eyes;
For Malvern Hills were with me all the way,
Singing loveliest visible melodies
Blue as a south-sea bay;
And ruddy as wine of France
Breadths of new-turn’d ploughland under them glowed.
‘Twas my heart then must dance
To dwell in my delight;
No need to sing when all in song my sight
Moved over hills so musically made
And with such colour played. —

A Community of Poetry Lovers

Ledbury Poetry Festival started with a group of friends and poetry lovers in 1996. Over the years, the festival has blossomed into one of the most exciting literary events in the country, and maintains the local spirit and enthusiasm that it began with.

Richard Surman, one of the founders, remembers the cast of characters who put things in motion:

‘The origins of the Ledbury Poetry Festival were modest and more than a little eccentric: of the original group that got together to discuss the idea of a poetry festival, a disparate “gang of six” emerged: a former blue badge guide turned artist, a joiner, a photographer, an organic farmer, a teacher and a former information officer with the British Tourist Association.’

‘With very little money, a lot of support from the local community, some energetic and intelligent fund-raising and brass necked cheek, our first festival included Sir Roy Strong, George Melly and a number of nationally known poets including John Cooper Clark and John Hegley. It was an intoxicating mix of poetry, music and town involvement.’

It was the enthusiasm and hard work of a group of local friends that got the festival off the ground, and it’s what continues to make it special today. Ledbury Poetry Festival wouldn’t be possible without the help of our volunteers, who do all manner of essential jobs to keep things running smoothly. They steward events, put up gazebos, host poets, serve food and do everything in between. It truly is a whole town effort!

Do It Yourself: The Dymock Way

In the early 1900s, another group of friends launched a special literary project not far from Ledbury. Whilst they were living in the area around Dymock, Wilfrid Gibson and Lascelles Abercrombie, along with their friend, the poet, playwright and actor John Drinkwater, decided to publish a journal of their poetry.

New Numbers was assembled in the Abercrombies’ cottage, and sent out to hundreds of subscribers all over the country from the Dymock Post office. In 1914, when the first issue was released, the railway still played a key role in the postal service. The journals, with addresses hand-written by Catherine Abercrombie with a baby on her knee, and stamps licked by Wilfrid Gibson, would have rattled across the country by train. Despite its humble beginnings, it was an important little journal, and it was the first place that Rupert Brooke published the poem which would come to define him: ‘The Soldier’.

It is thanks to the reminiscences, records and letters of the wives of the Dymock Poets, and their friend Eleanor Farjeon, that we are able to build a clear picture of the summer of 1914, when this group of poets came together in the lanes and orchards around Dymock.

Before she met Lascelles, Catherine was part of a burgeoning, forward-looking art scene at Liverpool University and Geraldine Gibson was a Cambridge-educated suffragette. It is important to consider the role that these women played in facilitating much of the work of the Dymock Poets: caring for their children, keeping their houses, cooking, cleaning and hosting, as well as reading their work and offering advice on New Numbers. Indeed, in a letter Rupert Brooke duly acknowledges that where the publication was concerned, ‘Mrs A. does the work’.

Your Poetry on Platforms

As we make the short journey to Great Malvern Station, there is just enough time to think about how people make poetry happen, in all kinds of different ways. How do others help us to create – by inspiring us? Feeding us? Reading our first, second, third drafts? Organizing events? Making up an enthusiastic audience? Or perhaps simply by bringing us a cup of tea at just the right moment…

If you feel inspired to write about this, we encourage you to create your own ‘Poetry on Platforms’.

Find out how a group of poets (including Edward Thomas, Robert Frost, Rupert Brooke and Eleanor Farjeon) assembled in the winding back lanes of the Gloucestershire countryside, and why people come from all over the world every summer to visit the little market town at the end of our trail…

where we will think about how the friendship between poets blossomed in 1914, and continues to do so at Ledbury Poetry Festival today.

where we will think about how the friendship between poets blossomed in 1914, and continues to do so at Ledbury Poetry Festival today.

Find out how a group of poets (including Edward Thomas, Robert Frost, Rupert Brooke and Eleanor Farjeon) assembled in the winding back lanes of the Gloucestershire countryside, and why people come from all over the world every summer to visit the little market town at the end of our trail…

Thanks to Jeff Cooper and Gloucester Archives for permission to use Catherine Abercrombie’s article from The Listener, ‘Memories of a Poet’s Wife’.

Thanks to Project Gutenberg for their reproduction of Letters from America, by Rupert Brooke. 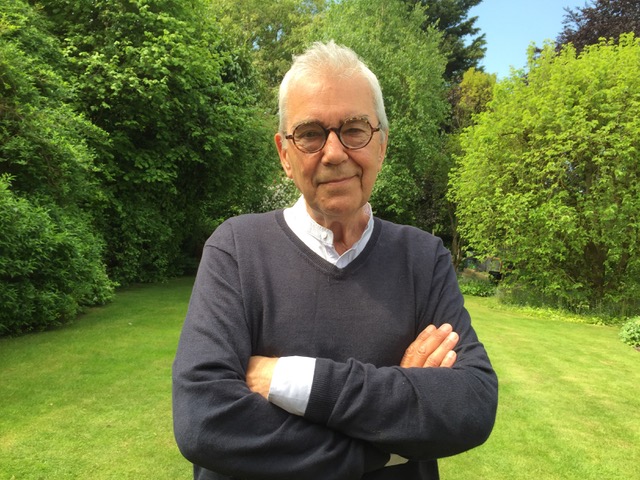